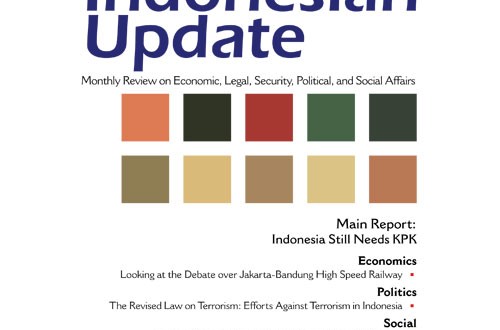 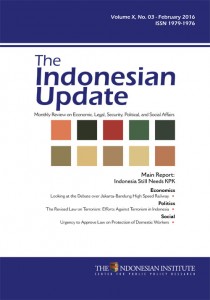 This February 2016 edition of the Indonesian Update will raise important themes on several fields. The main report for this edition is “Indonesia Still Needs KPK”. On the economy, it will talk about “Looking at the Debate over Jakarta-Bandung High Speed Railway”. On politics, it discusses “The Revised Law on Terrorism: Efforts against Terrorism in Indonesia”. On social affairs, it talks about “Urgency to Approve Law on Protection of Domestic Workers”.

The regular publication of the Indonesian Update with its actual themes is expected to help policy makers in government and business environment – as well as academics, think tanks, and other element of civil society, both within and outside the country, to get actual information and contextual analysis of economic, legal, political, cultural, and social developments in Indonesia, as well as to understand the public policy in Indonesia.